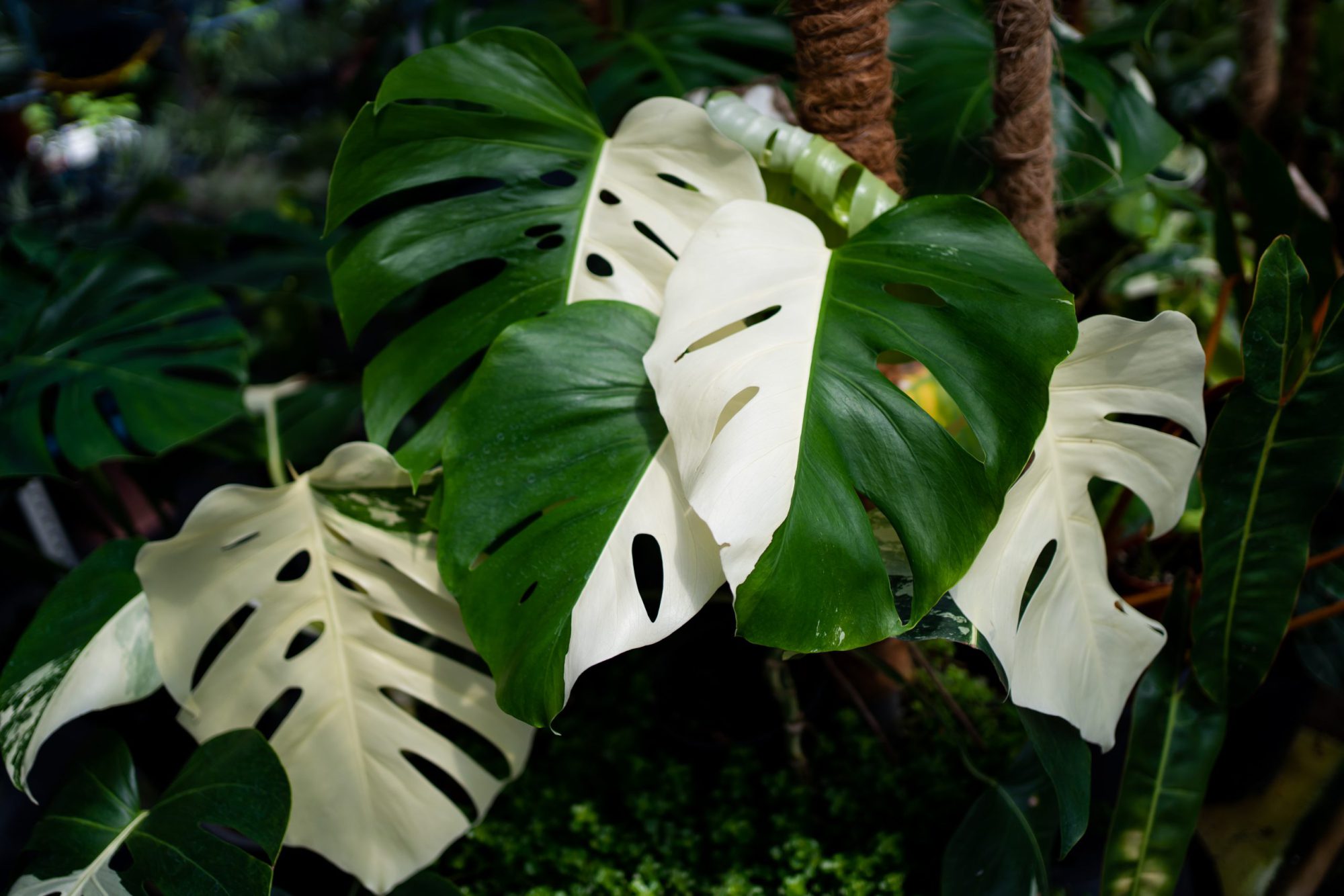 Ordinary Monstera Delciosa is one of the world’s most popular houseplants. Those that have variegated patterns on their leaves have practically reached cult status.

These infinitely photogenic plants are a beautiful addition to any indoor garden, or as a single statement plant. They’re highly desirable for collectors and widely traded on the internet and at international plant shows where they can fetch incredibly high prices.

What’s all the fuss about variegated Monstera Deliciosa? Here’s what you want to know about these rare and sought-after plants.

What is Variegation and How Does it Come About?

Variegation isn’t the sole domain of the Monstera plant, in fact, it can apply to any plant displaying multi-coloured foliage. Even some types of snakes have variegations.

That’s because the word variegated stems from a Latin term, ‘variegatus’, meaning simply ‘made of various colours or sorts’.

Most variegations are either genetic adaptations or accidents of nature, but we can break this loose description down further based on what causes the appearance of these colours, as follows:

This is the most common type of variegation. It’s caused by a genetic mutation where one plant exhibits two different chromosomal make-ups. In this case, some tissue is unable to produce chlorophyll like the rest of the plant.

This means one plant will have some white or yellow patches on their otherwise green leaves. This type of plant’s called a chimera and the variegated Monstera Deliciosa is one of these plants.
These markings are sometimes randomly spread around the plant. In other cases, the markings appear symmetrically or consistently throughout the plant.

Some variegated forms are stable while others aren’t. Unstable plants sometimes revert back to their solid green form.

Propagating plants with chimera variegation can be a tricky affair. Often, growers have little success propagating them from stem cuttings. Also, no chimera ever comes out exhibiting the same variegation from seeds, stem, or leaf cuttings.

These difficulties account for the rarity of these plants and it’s this transitory nature that makes them so desirable.

Some plants are naturally variegated thanks to their genetic makeup. In these cases, their attractive colouring passes down from generation to generation. Many plants in the Marantaceaue family have this type of pattern-gene variegation e.g. the variegated rubber plant.

Sometimes growers can enhance these natural attributes by careful cultivation.

In these cases, a pocket of air forms between the upper and lower layers of the plant’s leaf surface. Since the top layer’s naturally unpigmented, parts of the leaf appear silver when light reflects off this air trapped in the surface of the leaf.

Watermelon peperomia is an example of one of these plants

Rarely, viruses like the Mosaic virus can cause variegation in plants. Sometimes, botanists can reproduce an attractive pattern with careful propagation.

While some variegations occur naturally, as in the case of Aloe variegata, most variegated plants are cultivars.

You can tell the difference by looking at the plant’s Latin name. When the word variegata appears in italics, it indicates natural variegation. When the word’s printed with a capital letter and single quotations, it’s a cultivar i.e. ‘Variegata’.

The Different Types of Monstera Variegata

Even without a variegated veneer, Monstera Deliciosa’s an attractive and popular houseplant thanks to its large perforated leaves. When it comes with gorgeous white splotches, it’s an instant hit, and easily the most sought-after houseplant of modern times.

Naturally variegated plants are exceptionally rare, occurring at a rate of about 1:100,000. Yet, there’s plenty of variety to choose from when it comes to variegated monsters. If you can find even one that is.

These are currently the trendiest interior design accessory of modern times as well as being highly sought-after among collectors.

The main types are:

In some cases, the pattern covers up to half a leaf. This type of pattern’s known colloquially as the half-moon pattern. It’s this half-moon pattern that’s got plant collectors all agog after the first specimen debuted on Instagram. In very rare instances, the plant boasts some leaves that are entirely white.

According to the specialist plant store owner, Dustin Bulaon, his phone rings off the hook all day long with requests for these plants. That’s not surprising when you consider that they’re extremely rare and do not grow true from seed.

They’re a hot favourite with collectors thanks to their large, beautiful leaves and dramatic colouration.

These specimens have novelty value in spades and are highly desirable for collectors wanting something truly unique. The golden colour is even rarer than the usual white markings, these plants are extremely slow to cultivate, and only ever available in severely limited qualities.

This type of Monstera looks the same as the Monstera Aurea Variegata, except it’s created by genetic manipulation. Biological engineers do this by introducing the desired gene into the genes of a host plant to create the desired effect.

Since Thai Constellation is essentially a ‘man-made’ variety, it’s a little easy to come and easier to reproduce with the desired variegation. While this makes the plants slightly less valuable than their naturally-produced counterparts, they’re just as beautiful and desirable amongst collectors.

Since the Thai Constellation colouring is more stable than all the other varieties, it’s in very high demand and this coupled with limited supplies means you’ll still pay a premium for these plants.

These monsters have white swirls and splotches on their green leaves which result in the leaves having a ‘painted’ appearance.

Plant sellers call these plants ‘mint’ monstera since they’re one of the more recently ‘in-vogue’ types of variegations.

Their novelty stems from the fact that a large portion of the leaf is taken up by the white colour. It’s a rarity indeed to find monstera plants with such extensive patterning.

These pale speckled leaves are highly attractive and in great demand with collectors all over the world.

The main difference between var. Borsigiana and normal Monstera Deliciosa is size. Although this plant grows quicker than its larger cousins, it produces smaller leaves.

While Monstera Deliciosa leaves can grow up to a meter in size, Monstera Borsigiana’s leaves rarely reach 50cm. The variegation usually comprises white streaks and splotches and can also cover half or more of each leaf.

They may be smaller but this only adds to their appeal for urban and suburban collectors with limited space.

Monstera Adansonii is a much smaller and holier version of Monstera Deliciosa. The leaves grow to between 20 and 40cm long and are noticeably thinner than Delciousa’s leaves.
Adansonii often features abundant white paintlike streaks and some leaves may be almost entirely white. Other specimens have few markings, with attractive yellow or white speckles.
It has a trailing quality and is an excellent specimen for growing in hanging baskets. If you can get hold of one them that is, like all variegated monstera’s they’re rare, trendy, expensive, and hard to come by.

Monstera standleyana ‘Albo Variegata’ has small oval leaves about 15cm long. The leaves are deep green with splashes, speckles, and sometimes broad bands of white or yellow on them.

This plant doesn’t have holes in its leaves like most monstera plants but that makes it even more appealing for collectors looking for something different.

All these beautiful variegations except Monstera Thai Constellation occur naturally and can sometimes revert back to green. It’s rare for this to happen though.